I want to begin by acknowledging that we are continuing with the theme of rape in this module.  If you didn’t yet have a chance to read the Richlin essay included in the RESOURCES part at the end of this pressbook, I do recommend.

We’re going to read three versions of the same story.  They are short, but brutal.  By comparing and contrasting these, and diving into the repetition of them by multiple Roman authors, we will be able to consider their significance in Roman history and culture.

First, we return to Book I of Livy’s Ab Urbe Condita — jumping ahead 40 chapters or so.  We’ve skipped the description of several of the king’s reigns.  We jump in here at the tail-end of the monarchic period.  (Revisit Part II above for chronologies, maps, etc.).  The king is Lucius Tarquinius Superbus; he’s not an especially popular monarch.  He rules with his sons including Sextus Tarquinius.  We enter the story during a war with the neighboring Rutuli in Ardea.  Livy gives the most often read version of the rape of Lucretia, and the consequences for Rome.

Next, we’ll look at a second version of the same story: Dionysius of Halicarnasus.  A short bio is included in that chapter.

Third, we read a bit of Ovid’s Fasti, for a third version of this story.

As with the Rape of the Sabine Women, Lucretia has been a popular subject for representation in visual art (and other media, including a 1946 opera by Benjamin Britten, restaged as recently as 2016).  What do you make of another Roman rape with a still-growing afterlife? 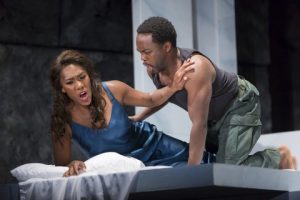 J’Nai Bridges as Lucretia and Will Liverman as Tarquinius in the Wolf Trap Opera’s production of “The Rape of Lucretia.” (Scott Suchman/For Wolf Trap Opera)

We will also read Sandra Joshel’s essay as well as Joanna Kenty’s “Avenging Lucretia” from Eidolon.  Begin, as you read these essays, to think about authorial voice.  Compare Joshel and Kenty’s styles.  I’m curious: are you beginning to develop your own style on your blog?

Please continue to use hypothesis to annotate this module.