One place where Roman sexuality could flourish in whichever way it seemed fit was within the walls of the many brothels. As discussed earlier, soliciting sex was seen as a more elite form of masturbation for the Romans. Brothels and bath houses were common for the common folk, and the more powerful Roman citizens could purchase slaves to have sex with instead. In major cities such as Pompeii, you can still see the phallic images that adorned the floors, each pointing towards the nearest brothel. This kind of advertisement worked well as foreigners and sailors who could not read or speak the Latin language could understand where to find what they were looking for. The buildings were adorned with the imagery shown above, either to arouse guests or to show them how to do certain sexual acts. The rooms themselves were small, though; cells big enough for only the bed. Both male and female prostitutes worked within the walls, all performing the role of the submissive, as masculine men were the only acceptable man in Roman culture. 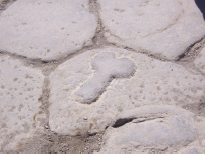 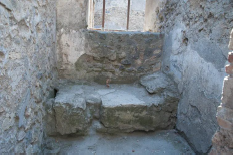 Inside of Pompeii brothel

The place where the majority of talk about masturbation exists not on the page, but on the wall. Graffiti lines the walls of the surviving Roman cities, adorning plenty of dick jokes and masturbation confessions. Pompeii provides an excellent example of that, as it was so well preserved by the very eruption that destroyed it. On the walls of one Pompeii building, a man scribbled “multa mihi curae cum esserit artus has ego macinas, stagna refusa, dabo” (when my worries oppress my body, with my left hand, I release my pent-up fluids) (Younger). Writings such as this one can still be found all throughout the city. In one of the cities basilicas, another person just pokes fun at the reader, saying “Pum[pei]s fueere quondam ‘Vibii’ opulentissumi || non ideo tenuerunt in manu sceptrum pro mutunio || itidem quod tu factitas cottidie in manu penem tenes” (at one time, the Vibii were the most noble at Pompeii. For that reason, they did not hold the sceptre in hand like a penis, as you do habitually in the same manner every day, holding the member in your hand). The Romans were colorful with their language, but the subject remains the same. They are able to discuss the most vulgar of topics this way. Phrases are not the only graffiti adorning the walls either. Imagery of penises and other sexual acts adorn the walls of the Roman Empire as well. The image below shows a graffiti image of a penis that was carved into the wall of a place conquered by the Roman army. Graffiti has not evolved much from the Roman times until now, as almost everyone has likely seen a penis just like that one drawn in a bathroom stall. Graffiti is an interesting source to look at because it was not written by the famous writers or the wealthy elites; it was written by the everyday people who lived within the city walls. It is one of the few sources that show the perspective of the common folk.

The graffiti on the walls of the Roman Empire gives great insight into what kind of humor the everyday person found funny. Thus, it is one of the strangest but most important sources to look at when looking into comedy in Rome.

Roman theatre is yet another walk of life that is injected with jokes about penises and masturbation. Roman theatre was not known for being the most civil place to be, as it was riddled with themes that were not exactly safe for the eyes and ears of children. Thus, jokes about masturbation were all too common. One of the famous comedy playwrights of the Roman Empire was Plautus. His comedies were well adorned with sexual humor and dick jokes, as was common among Roman comedies. He did not write about the wealthy elites; he wrote about everyday Romans. Thus, he could use sexual humor and insults without worry of upsetting anyone with any serious power. Even part of the name he used, Titus, was a dick joke, as Titus was slang for penis during the time he was writing. Throughout his plays he would make references to penises and He would make jokes about a man’s “gladius” which literally translates to sword but was a Roman euphemism for penis. It is believed that Plautus took much inspiration from the Greek comedies, but jokes such as that one are entirely Roman. Comedic theatre from the Roman Empire was made for the common folk and therefore needed to have humor that the common folk could relate to. While not much has survived into the modern era, that that has is riddled with puns and jokes about anything and everything sexual.

Barber, Helen, Esther (2011) Plautus and the Sentimental Ideal of the Roman Family, Durham

Fiske, George Converse. Lucilius and Horace: a Study in the Classical Theory of Imitation.

Henderson, John. Writing Down Rome: Satire, Comedy, and Other Offences in Latin Poetry.

Johnson, Marguerite. “The Grim Reality of the Brothels of Pompeii.” The Conversation , 17 Oct.

Keegan, P. “Writing and drawing on the walls of Pompeii: how the study of graffiti relates to the

Younger, John G. Sex in the Ancient World from A to Z . Routledge, Taylor & Francis Group,