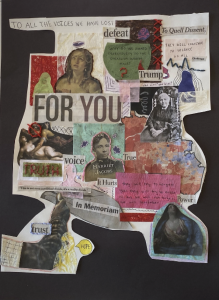 This project has been hard to do. It has evolved from several different ideas. It started with the classic essay form, but as I sat down to begin writing it, the form felt wrong. It felt hypocritical to write a paper about how Lucretia wasn’t given a voice from a third person perspective. Similarly, it felt impossible to put another perspective on Harriet Jacobs’ life and experience, as she was a person who lived a real life with real experiences. My next idea was a mindmap, tracing the experiences of the two of these women and incorporating my own experience. When I began to do that, it still didn’t quite fit; I wasn’t sure how to relate my experience to theirs in a productive way. Then I wanted to do a video but was facing similar challenges of positionality and representation. I finally landed on the idea of a collage. Although I’m not an artist by any means, it seemed to allow me to represent all of my thoughts on this project in one place. The sort of hodgepodge form of collage, which would typically feel so unorganized, surprisingly brought a sense of organization and calm. I think the circumstances of this semester definitely led to this project; the chaos it invokes is very indicative of my headspace at this moment in time. I also like that a collage leaves room for different interpretations. I think an important part of this work I am doing in exploring my project is the fact that we will all experience it differently. My intent in this collage may be totally different from the way that someone with a different positionality understands it. It allows for the viewer to see their own experience and tell their own story through their interpretation.

For the collage itself, I started with the idea of objectivity. I have been constantly obsessed with the way that objectivity is given to the straight white male throughout this entire seminar. It seemed to permeate every discussion we had, every piece we read, every unit we explored. I also wanted to relate it to the election in some sense, as I think this election has shown how much trust and faith our society puts into straight white men, which is why I added Trump’s (ew don’t even like typing it) name into my collage. I wanted to juxtapose this inherent objectivity we give to straight white men with Harriet Jacob’s experience. Although she was able to put out a narrative piece on her life, she was forced to continually tell the reader that she was telling the truth. She had to get her piece, Incidents in the Life of a Slave Girl, vouched for by a white person to get published. Even after her constant reassurance (which shouldn’t have been necessary), there were still people who criticized her account and questioned if it was true or sensationalized. Her work is not in the common literary canon, and few people in modernity come into contact with it. It is beyond problematic that society disregards the truth of minorities’ autobiography and awards truth to the third person account, often told through the voice of white straight males.

I wanted to seperate Lucretia from the stories of her in this collage. Although she wasn’t a real person, her position is one that is not uncommon for women throughout history. I wanted to situate her with words such as “for you” “truth” and “voice” to show the agency she should have been given and that all women should be given. I also wanted to include the picture of Lucretia with Sextus Tarquinius on top of her with him crossed out to show who the focal point of Livy’s story should have been: Lucretia and her experience. I continue to wonder how the story would have been different if a woman had written it or if someone in Lucretia’s position had written it. I’m sure it would have been different, which is so important in understanding why the autobiography is so necessary.

I wanted to incorporate newspaper clippings to symbolize how this problem has persisted into modernity. It is frightening and shocking that this issue of objectivity and lack of representation has stemmed from Ancient Rome and continued into our modern epoch. So much so that I still feel the weight of it in this election, in my institution, and in the media. I wanted to include some of Missouri’s electoral map as a representation of politics and the political power that shapes our understanding of truth. I wanted to include a mix of textures and materials also to show the diversity of the issue. I used embroidery floss throughout to show the ways that all of these different people connect through time and space and their continual impact on my life and our society. I also included different colors to show how different aspects of this project make me feel; such as the color red to show my anger and frustration with the way our society functions and runs.

Throughout the collage I also incorporated four little cut outs of a person, which represents me in relation to this project. I wanted to show my own journey as a passive observer and also as an active participant in recognizing and displaying the problems in our accounts of history. The first bust of a person is in the top right corner in blue, which is where I recognized this idea of objectivity I continue talking about. On the left side, there is a second bust in green next to a cut out of Lucretia, symbolizing my role as observer to her story and my wish that she could’ve told her own story in the way that it happened to her. The third one is pink, in the middle next to Harriet Jacobs and the newspaper quote “This is not even a political divide, it’s a reality divide”. This point in my process was all about this discussion of voice and politics, who is missing, who wins, and who loses. My final bust is at the bottom in yellow, with a text bubble of hope next to it. I wanted to incorporate this part to remind myself that this work of unlearning and re-imaging is important and worth doing, and the fact that I have begun to do it gives me hope.

The experience of putting this project together and reading the accounts and narratives of the people who I wrote about was challenging, heartbreaking at times, and rewarding. I know that this is just scratching the surface of the work that needs to be done in this topic, but I am glad and proud that I was able to begin thinking about it. I also want to recognize that unlearning deep white supremacist patriarchcal values is a never ending process and to progress on it throughout this project has left me eager to continue the project of unlearning and reimagining.