According to the various colleges there is no such thing as a “typical” Claremont College student. They come to Claremont from almost every state and from around the world—from large cities, suburban areas and rural corners that don’t appear on any map. They come from a wide range of ethnic and cultural backgrounds and from almost every imaginable kind of school, and they bring with them a wide range of interests and aptitudes. They are students who pay upwards of $50,000 tuition, and on average between the colleges an additional $1000 for textbooks. Students in general are being asked to pay a lot for textbooks. In fact the cost of textbooks has risen over three times the rate of inflation from January 1977 to June 2015, a 1,041 percent increase. 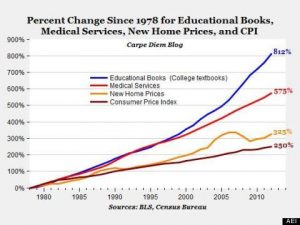 Source: Bureau of Labor Statistics (BLS) data, textbook prices have risen over three times the rate of inflation from January 1977 to June 2015, a 1,041 percent increase.

OER Subject Librarian Toolkit by Jennifer Beamer is licensed under a Creative Commons Attribution 4.0 International License, except where otherwise noted.